This is another meme doing the rounds on the web: 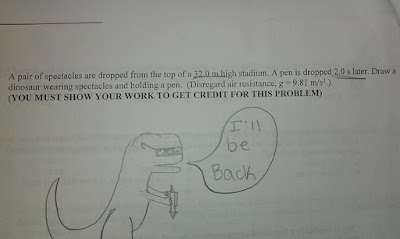 I think we can take it as read that "Draw a dinosaur wearing spectacles and holding a pen" does not relate directly to course objectives. I am a somewhat open to the idea of demonstrating to students the need to (a) read what the question is asking carefully and (b) the importance of showing one's work in such examinations, but um...hoping this was for an ungraded assignment (in class or homework) not a question on an actual exam. As a practice exercise, one of these a semester is fine—a little levity goes a long way, and there is a point to be made. [Doing this more than once would be bad: once is about student learning; twice is about the instructor projecting their self-image as a cool teacher. I think it safe to assume the current example is a one-off by a superior instructor, not role modelling a routine to be adopted by other, less grounded instructors.] So, no harm done if used sparingly and only in a non-graded context.

As an actual exam question, humour is a no-no. Because the examination is supposed to be targetting legitimate curricular objectives: unless your science curriculum includes "demonstrates a sense of humour" or "fine motor skills in the production of art" questions such as this example are out of line. Further, although the instructor may believe the injection of humour is a way to reduce stress, the fact is that at least some students will be panicked by it. Knowing in their hearts that an examination is no place for levity, their reaction to encountering it is likely to be disbelief and the assumption that they have misunderstood the question. In this instance, they will waste precious seconds obsessing about the meaning of the dinosaur. How does the height of the dinosaur change the question? Is the question now 32 meter's height, plus the height of the dinosaur? What is the significance of the pen? the Spectacles? Such superfluous information can drive a student crazy. And that's for normal kids. Throw in say, OCD or second language issues, and one is screwing up the accuracy of the assessment, not only for that question, but all the other objectives being examined that had that fraction of time less to think about.

So, occasional funny questions on practice exercises, maybe. Understand that some students will share your sense of humour and respond well, but others will not. But that can be addressed in class if the class atmosphere is a positive and safe one. On an actual for grades test or assignment, never.