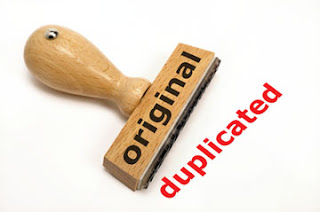 As referred to in the previous post, students sometimes plagiarize passages from the Internet to insert into their written assignments. Even in large classes where one does not know students or their work that well, one can usually spot such insertions immediately because the diction, style, thoughtfulness, etc does not match with the rest of the paper. In fact, it is often hilariously discordant because weak writers do not know enough to be able to assess their own weaknesses, and cannot themselves detect the errors in their own work that make the lack of such errors in the plagiarized passages so blatant.

Proving the copying, however, is sometimes a bit trickier. The quick and free way to start is to select some distinct phrase from the suspect passage and googling it. About half the time the passage will immediately pop up as Google recognizes the source for that phrase or sentence. Miscreants will be astounded that one found the article in some book or article they had assumed to be too obscure to come to one's notice, but of course one has at least as good a command of Google as they do, and most of them have never heard of Google Scholar, and one is searching by phrases not topics, so likely nailed it a good deal faster than they had unearthed it originally.

There are a couple of student tactics for getting around such simple counter-measures, however. First, some students figured out that if they run the original passage through Google translate to switch the passage to say, Italian, and then back again into English, the original phrasing will be sufficiently garbled that a Google search will not be able to find the original passage. Of course, the diction and style is so garbled by these measures that the plagiarized passage virtually leaps off the page. Similarly, if you get a nearly incoherent essay that says sort of the right content, it may have been a complete paper lifted off the net and transmogrified. Of course, such writing is so atrocious, it may not be necessary to even raise the issue of plagiarism, since an 'F' is an 'F', but if the references have been left intact, those might be a good place to start a Google search.

Another student technique, with which I had been unfamiliar until brought to my attention by Murray Hay, PhD, is that they can insert hidden characters with a passage so that when one copies the phrase to search for, Google looks for the phrase including the hidden character(s) and so does not find it. The solution here, obviously, is to type the phrase into Google oneself rather than cutting and pasting.

Another quick strategy for identifying stolen passages is to check for paragraph styles. Students usually have the wherewithal to do a 'select all' and change the font to be consistent throughout, but may well forget to change (or not understand about) styles in Word. Doesn't always show up, but if you spot a variety of styles for different paragraphs, the question has to arise why the student would do one paragraph in this style, the next in something else, rather than stick with the default.

Of course, there are services, such as Turnitin.com, that will provide a much more sophisticated analysis of a paper for a fee. I recommend strongly against the use of such services. First, as mentioned in my previous post, I dislike the assumption of guilt whether directed at 'suspect' papers, or routinely applied to the entire class. The damaging effects of false accusations make identify specific suspect papers morally untenable; and applying the process to all papers denigrates the entire student population and undermines the trust required for effective teaching. Further, there are many copyright issues around a service such as Turnitin.com, as the company adds any paper analyzed to its database. Student work is the student's, not the faculty's or the instructor's, so cavalierly handing it over to a third party strikes me as a highly questionable practice. I suppose your faculty can impose any testing it wants as a contractual requirement for receiving a degree from the institution, but such high handed actions have about the same character as drug testing. So, you know, good luck with that.

If one does use a service such as Turnitin.com, it is important that this be noted in the course outline; otherwise, one runs the risks of lawsuits.

Term paper mills are another concern of many instructors, but these are usually not worth worrying about. Yes, a student can buy a generic paper off the net, often at quite reasonable rates. No, they probably won't fit the specifics of your assignment—>unless one are designing very bad assignments. A generic paper on MacBeth might fit a generic assignment on MacBeth, but if one is designing your assessments on the questions at the end of the chapter or the package that came with the Powerpoint for the course, than one deserves what one gets. Authentic assessments do not lend themselves to generic answers found on the list at some term paper mill. If one's says, "I need a paper on MacBeth", then students will try to find one for you. More interesting questions generate more interesting papers (which are also more interesting to mark). If on the other hand, one has questions that more accurately reflect the needs and interests of one's students, then the generic paper is going to be off topic. Students too weak or too rushed to write credible answers of their own will be correspondingly unable to adapt the plagiarized paper to the specific demands of the assignment.

Wealthier or more desperate students could theoretically commission a specifically targeted paper through some of the more sophisticated paper mills, but I've never encountered one worth more than a 'C' (in a class with a B+/A- average). Better than a 0 for no submission, I suppose, but that student wasn't making it through the final anyway.... Detecting the plagiarism is likely easy for anyone with classes small enough to know individual students, since the paper's style and the student's will usually sufficiently diverge as to be obvious. Certainly, their in-class performance will not likely accord with the knowledge, skills, and opinions expressed in the commissioned paper. One then just asks to discuss the paper with the student, asking questions about their reasons for decision to do this or that in terms of the content. If the student is able to answer fluently, then hey, they actually know the content, so what's the problem? They perhaps beat an arbitrarily imposed deadline, giving them an unfair advantage over their peers, but it might be better for the instructor to re-examine one's deadlines than worry obsessively about plagiarism. More likely, students commissioning such papers forget to even read it, and their lack of knowledge about their own submission will give them away.

The problem is more serious in larger classes where students can count on their anonymity to protect them from too close scrutiny. One way to cut down on cheating is to have students post their work to a secure class website to share. Although you and your marker may not be able to identify the plagiarist, their peers often know. Habitual cheaters will be often fingered by long suffering peers, and those papers can be examined more closely. I have colleagues who identified several such cases by opening up the Personal Information page (which few students ever bother with, or even know about) and noting the paper was written by someone other than the student.

Ultimately, the best way to address plagiarism is to design better assignments. Is the term paper even an appropriate format for one's course? There has been much ink spilled in defense of this traditional assessment, and it does indeed hold the potential to assess student writing ability, critical thinking skills, and so on; but that is equally true of many other, possibly more relevant, written formats. Further, although essay assignments could test critical thinking and writing skills, they mostly don't. Badly constructed assignments often amount to little more than asking students for an info dump on some topic, regurgitating the instructor's analysis rather than their own. Such assignments encourage plagiarism. Instructors using an Inquiry Approach, on the other hand, instead ask students to research personally relevant questions for which answers do not yet exist, which makes plagiarism rather irrelevant. If one honestly believes plagiarism to be rampant on one's campus, change up the assignments rather than clamping down on students. Widespread plagiarism indicates structural problems with the institution's assessment practices: bad assignments, poorly administered; administrators who fail to enforce official policies when instructors identify plagiarism; unnecessary and unrealistic pressure on students with a program; policies that enforce unfair grading practices (e.g., limiting the number of high grades in a class, regardless of actual student mastery), and so on. Fix the problems, and plagiarism will largely disappear, with the exception of a few sociopaths clever enough to get through the above screens. And really, are these not the future engineers and executives of, say Volks Wagon, that our institutions are intended to produce?

Oh, and speaking of plagiarism, I cannot tell you how many times I've heard colleagues go on and on about students stealing whole lines from the net, who, when I pass by their classrooms, have Powerpoints filled with images they've stolen off the net. Whenever I challenge then about this practice, the inevitable answer is some variation on, 'that's just pictures' or 'well, I can't be expected to draw that', without any apparent recognition of the irony of their actions. Unless you have received permission and cited the source for every illustration in your own presentations, stop saying you "don't understand why students think it's okay to plagiarize," because you've been role modelling the same behaviour.

(The illustration for this page, is from http://writersdepartment.com/.)