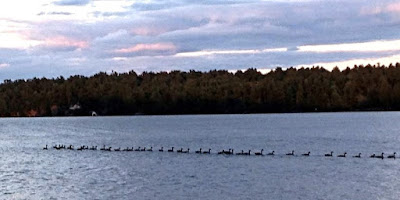 In my continuing quest to refine, define and sublime learning outcomes, objectives and competencies I would like to share a new challenge. All of the above require clarity (both parties should be able to agree on what that goal or outcome is) and be able to be assessed. I thought of one that fit both those requirements but…

In the department of “That sounds simple, yes I agree, and of course, I’ll get right to it!”, I would like to offer an example of how the warm reception of an agreed-upon outcome/objective can be misleading:

This is a very common expression. We use it all the time: it can be agreed-upon as an outcome or objective because it sounds reasonable, constructive, observable and easy. But, have you ever thought of how difficult it would be to actually get ducks in a row? How would you do it? Who do you know that can talk “duck”? and if they did would the ducks pay any attention to them? I don’t think so.

If you had treats they might come to you, but in a row? Are you kidding me? (Perhaps polite Canadian ducks might line up but I wouldn’t bet my B+ on it.)

Is this an impossible goal that we keep striving for?

Perhaps this is a complete misunderstanding on my part, a trick question. Perhaps it is very easy to get all the ducks in a row. They would have to be immobilized (as in tranquilized or shot) but I never considered that as an option when contemplating the task: sounds pretty nasty even if it does get me the B+.

For an “A” I think you have to herd cats, but that’s another story.

Beware the simple-looking objective my friends.

It's what grade to give the student who turns in a goose that I have a heard time with. Is that an original, better-than-asked-for duck...or did that student miss the target completely?

[Which is why, when multiple markers weigh in on the same paper, a small percentage of papers get an F from some instructors, an A+ from others. Doesn't mean marking is completely and randomly arbitrary; just means one interpreted objective literally and sees answer as off topic, while the other saw paper as thinking outside the box.... (In Alberta provincial exams, such a paper goes to a special committee to decide which of the two markers is correct in this instance.)]