I was recently asked by a colleague what my policy is on late penalties. This is, in part what I replied: What I tell my students is, if you submit it before I've gotten around to marking the rest of the class, you're in the clear. That way I don't hold them to a higher standard than I am able to meet myself. It drives students crazy when they have to get an assignment in by such and such a date, and then watch the pile of unmarked papers sit on the professor's desk for four weeks. What was the point of imposing that deadline?

(Instructors often seem quite willing to make excuses for themselves—life happens—while denying the same right to their students, who may have the same or greater out-of-class responsibilities, and considerably less resources to bring to bear to resolve issues then their instructors.) 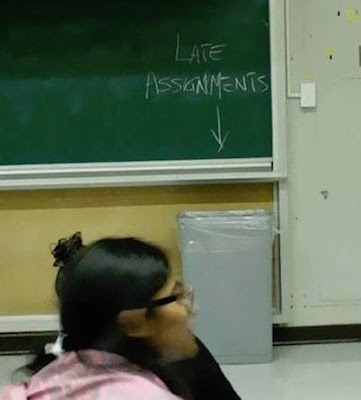 From an assessment point of view, there is no logic to time limits on learning, save in those few subjects where automaticity is in fact a criterion. If it takes one student two days longer to figure out a concept, does that make their understanding of the concept less valid? The argument that the extra time gives the late comer an advantage over those who made the deadline is only valid when normed referenced grading is used, which I would argue is largely inappropriate anyway. Criterion referencing is more valid in most situations, so unless timeliness is a justifiable criterion, I can't see why we have any deadlines, except the logistically necessary ones of "end of the course".

I tell my students that due dates are guidelines for managing their workloads, and that if they miss the deadline I can't guarantee they will received the assignment back before next one is due. So it's in their interest to meet the deadline, and 99% do. The 1% who are late usually have a good reason (family priorities, for example) and it is oppressive of us to arbitrarily and inaccurately certify that they have learned less and performed less well then they really have, just because they missed some due date. For example, many of my students are single moms—why should I deduct 10% from their grade because their child got sick the week the assignment was due? Similarly, many of my students are First Nations, and have responsibilities to an extended family. I would argue that penalizing such students in this way for prioritizing family over school is sexist, racist, ageist and etc., etc. because the young white males living in their mom's basement and having their meals and laundry done for them have much less difficulty meeting deadlines. Deadlines and penalties may have been partially justified when students were full-time students only, but the reality is that our students have jobs, families, responsibilities and lives outside the classroom, and insisting that our course be the most important thing in their life is just egocentric nonsense.